Posted on 26 Ιανουαρίου 2009 by brexians

The Romanesque art was influenced by Rome. The subsequent development took a completely different course. This change was so noticeable that it was regarded by the humanistic scholars as a product of barbarian, possibly Goths’ culture (Goths were one of the German nations, who ruled in Europe after the fall of Roman Empire).
That’s how the term Gothic (originally pejorative) was coined.

In reality this art, which was influencing Europe for almost four hundred years, didn’t have anything in common with Goths. It sprang from the same roots as the Romanesque art and was its natural continuation. The Gothic culture started coming to the Czech land from the second half of the 13th century from France, where it originated in the 12th century. This movement flourished in Europe for four hundred years, so it is clear that it was evolving and changing. Different periods are called early Gothic (the Přemyslid dynasty in Bohemia) high (Jagiellonian dynasty) and later (Luxemburg Dynasty).

Gothic life style was influenced by the advance in craft. There was a strong desire to forget about the worldly misery and find salvation in God. The faith in an after life in God’s realm was the keynote.

Architecture
Architecture is the field which was mostly influenced by Gothic. Gothic architecture is the architecture of many churches, cathedrals, castles, fortresses and also town halls, townsman houses and bridges. The building material was stone and new techniques enabled people to build high and spacious buildings, illuminated by light coming through big windows. Churches were rising aloft as if they wanted to reach the sky with their spires. Compared to the Romanesque style, the walls were relatively thin and complemented with a supporting infrastructure.

One of the most distinctive characteristics of Gothic architecture is the pointed arch seen in windows and entrances. Gothic architecture is rich on religious symbolism, pointed arches reminiscent of hands joined in prayer, the magnificent architecture exalts the minds of believers and cathedral space is shaped like a boat, reminiscent of Noah’s ark. Stone, then a novelty in building, was used even for the exterior decorations, almost all buildings were richly decorated with spires, rosettes and gargoyles. Interiors were decorated with tabular paintings and sculptures made out of wood and stone. Goldsmithing and forge work also became important.

The most famous Prague Gothic monuments:

City development
Romanesque culture was engaged in only by clergyman and monks in monasteries. In contrast with that, the leading lights of Gothic culture were town dwellers. Townsmen were building stone houses and places for trading and crafts. In 1348 the New Town of Prague was founded by Charles IV. Its pattern was designed geometrically with the base in three squares, which used to be called markets at this time (Koňský, Dobytčí and Senný). The main centre of the New Town was Koňský market (today at Wenceslas Square), its angle was 45 degrees and became axis for the whole New Town, Vltava river bend and other squares (today Charles and Senovážné).

In order to accelerate the development, the emperor came up with a very shrewd idea. He announced that if a stone house would be finished within eighteen months then a townsman receives certain liberties, most importantly he won’t have to pay tax for the duration of twelve years. No wonder Prague became three times bigger than Paris. Just Dobytčí market (Charles Square) had 550 maters in width and 152 meters in length and thus became the biggest square in Central Europe. Some streets reached 26 meters in width (one of the examples is Ječná Street) and the New Town fortification reached as far as Vyšehrad

Hand in hand with the city development, economic progress also grew stronger. Prague’s merchants were awarded a monopoly position in local trade and foreigners were allowed to sell their goods only through local merchants, foreign trade was only at one specified market in Týnsky dvur (Ungelt). Jews had an important position among Prague’s tradesman because of the economical restrictions given by their religion – they could assert themselves only in trade and in lending money with high interest, so called usury. 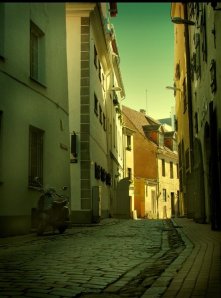 An annual festival market tradition developed in the Old Town. Two markets located here were called Svatováclavsky (dedicated to St Wenceslaus) and Svatovítsky (dedicated to St Vitus). On the occasion of these festivals one week markets offering various provisions took place in Old Market (Old Town Square) and New Market (by the St Havel church). Apart from these markets there were also other specialised markets visited regularly by housewives buying supplies for meals and everything that was needed for their household. There was a coal market at Kozí plácek, a fruit market at Maly rynek, a chicken market by St Nicholas, a wood market at St Valentin and a market at Old Town Square. Every Saturday there was a meat market at Ovocny market, which was called Frajmark.

Thanks to a silver find in Kutna Hora, Prague started minting silver coins called Prague Groshen (groš). As with the rest of Europe in the fourteen century Prague was stricken by plague. This terrible tragedy in 1380 had one positive consequence – the city council issued a strict ban on water discharge from malt houses and spas on streets and also a ban on walls and ditches’ litter and faeces pollution. This meant that city slowly stopped drawing in its own faeces and typical medieval smells.

Another change was the introduction of the road toll for vehicles coming to the city and the collected money should have been used for the Prague streets’ pavement. Only vehicles delivering stones from quarries were exempt from the toll payment. The firs public spa grew in the Old Town. It was called Na Hrobce and, according to the records, “it was situated in house number 679”. Just a short distance from it, three chemists stood: Augustin chemists in the U mouřenína house, Onofria chemists in the U lilie house, Charles IV’s court physician Angela Florents’ chemist was on the west side of the square.

Education, literature and arts
Monastery and rectory’s schools served since the early Middle Ages for the priesthood’s education. It wasn’t until Gothic times that schools were founded by wealthy townsmen, who send there their children to learn reading, writing, counting and Latin. Latin wasn’t just a language of church and scholars, it was also an official international language. Town schools were attended by patricians, tradesmen and wealthy craftsmen’s children. The poorer students, if allowed in a school, depended on charity.

After 1200AD books and official documentation was not only in Latin but national languages started to be used as well. The oldest Czech literary work is Dalimilova Chronicle. Afterwards other Chronicles came – Petr Žitavsky, Hussites and Vavřinec of Březova Chronicles. Literary works with other than religious themes began appearing such as satiric books criticizing society and texts for theatre performances.

It was theatre which was going through a period of significant development. At the beginning mostly Latin gospel texts were dramatised. These were sung by priests but over time were supplemented by laics (non religious players) that started adding comic sequences in national language. In consequence the Church expelled the plays from churches to public open spaces. Plays and comedies became very popular among Praguers who very often stopped to watch them when shopping at one of the famous markets. From the source books is obvious that the biggest hits were mainly three following theatre performances:

GALIPOT – a drama about three Marias who go shopping for ointments so they could embalm Christ’s body. The ointment purchase is described in details with main topic being a mockery of precarious medieval charlatans medical procedures
DRAMA ABOUT MERRY MAGDALEN – is ridiculing religious topics (Magdalen is described as a prostitute), contains folklore songs and it is very well written
ABOUT CHRIST RESURRECTION – doesn’t show much respect for religion

Fashion
Close fitting garments, lappet sleeves wider at the end, pointed shoes, corsets and veils – these are typical for the Gothic fashion that replaced the Romanesque one, more akin to monk’s garments than fashion dress. Fashion was, in Gothic times, influenced by the knight culture and new developments which created new esthetical ideals. Male stereotypes changed from a brave warrior dressed in rough trousers and shoes to an effeminate youth wearing long fuzzy hair, decorated with flowers.

A complete novelty was a corset which was a bodice so tight that it significantly restricted movement. Skirts became longer (with a longer tail), sleeves were widened from the elbows in long tails which were sometimes reaching the ground: in Bohemia these were called “pachy“(smell) because they trailed behind the walking person like an odour.

Traditional dress in Gothic times was a cloak, it had a semicircular design and lining usually made out of fur. It was joined together on the breast by a decorative clasp or a sling. A big emphasis was placed on hair, curling was in fashion, women and men were daily scorching their hair with hot irons. The poetic ideal was a girl with shoulder length curls, a decorated head-dress and colourful flowers.

Young girls were allowed to show their hair in public but married women had to cover their heads with expensive veils. In the 14th century so called “Czech hoods” became very popular, this adornment was reminiscent of a halo. Czech fashion was, in the Luxemburg period, famous all around Europe, it was brought to England by the princess Anna in 1382 who became married to the English court. Much in demand were Czech padded men’s coats which were sown in Prague and exported abroad.

Shoes were sown mostly from bright red leather and had pointed foreparts. They were called “stork noses” and for many moralists became embodiment of fallen luxury and debauchery. Eventually the Czech king George of Podiebrad (Jiří z Poděbrad) had to ban this item and cobblers were not allowed to produce them. Despite that the pointed shoes (together with female tails) lasted till 16th century and marked next movement: Renaissance

«A journey of a thousand miles must begin with a single step.» — Lao Tzu
Copyright © Demetrios the Traveler