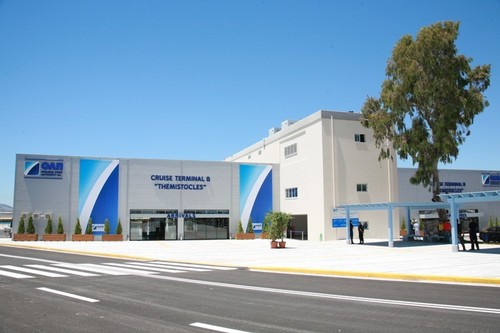 A modern international passenger station, to serve cruise passengers (Cruise Terminal), was acquired and put into operation by PPA SA.
The opening of the station, which was named International Cruise Station «Themistocles», was conducted by the Minister of Marine and Aegean Mr. Konstantinos Mousouroulis, with the presence of the Bishop of Piraeus Messrs. Seraphim, the former Ministers Mrs. L. Katseli and Mr. I. Diamantidis, the Vice President of Parliament Mr. J. Tragakis, the Piraeus MPs Mr. A. Nerantzis (Nea Dimokratia), Mr. M. Repousis (DIMAR), Mrs. E. Vamvaka (SYRIZA), the Mayor of Piraeus Mr. B. Michaloliakos, the General Secretary Mr. A. Christopoulos, the Regional Prefect of Piraeus Mr. St. Christou, the President of the Piraeus Commerce Chamber Mr. V. Korkidis, the President of Piraeus Professional Chamber Mr. G. Benetos, the President of the Panhellenic Union of Merchant Marine Captains Mr. G. Vlachos, the Presidents of the Associations of ferry and cruise, shipping companies and classification societies, the President of the Piraeus Bar Association Mr. S. Manousakis, representatives of all the corporate cruise offices, the former Chairman and Managers of OLP  Mr. G. Prassianakis, Mr. S. Stalias and N. Anastassopolous, Navy Headquarters and the Central Piraeus Harbour Master Mr. Sarigiannis, Piraeus Customs and Police Representatives.
Welcoming the guests, the President and CEO of PPA SA Mr. Yiorgos Anomeritis among other said: “The port of Piraeus is the main hub of the cruise ports of our country and the largest cruise port in the Eastern Mediterranean. This port is preparing now for 2021, when we will celebrate 2.500 years since the Battle of Salamis and the establishment of Democracy. By 2017, we will have completed all works for the Cultural Coast of Piraeus, turning the port into the main gate of Tourism and Culture of the country, and all the works of port and inland infrastructure to accommodate cruise ships and their passengers. The port of Piraeus, which is successfully and profitably managed by PPA SA, is a national-based hub for the Greek cruise. We currently invest in and execute projects that support the national economy and the port industry.”
The project was done with equity of PPA SA and is consisted of 5.600 m2 of covered areas and a surrounding area of around 9.000 m2, at a cost of 4.2 million Euros.
Along with the First Cruise Passenger Terminal “Miaoulis”, PPA SA can simultaneously serve 25.000 passengers a day, while by the end of 2013 the Third Cruise Passenger Terminal Station “Agios Nikolaos” will have been completed, with an area of 3.500 m2, alongside the cruise port at the coast of Miaouli.