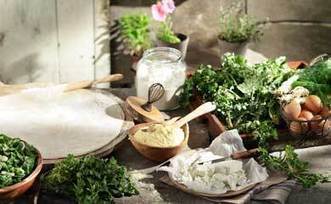 The most common of these pies made with wild greens is “blatsara,” where, instead of a simple phyllo pastry, the filling is encased in a thick batter made of corn flour, soured milk and olive oil. The secret is to achieve the perfect consistency so that you can spread a layer on the bottom of a baking tray, cover it with a mixture of greens and cheese (optional) and top it off with another layer of batter, getting a nice, crunchy top and bottom after baking. In another recipe, wild mushrooms are used in the same way as the greens, with the difference that they are sauteed with onions and drained of their juices beforehand.

In Epirus, cooks also fold the filling into the batter, resulting in a kind of pastry-less tart.

In villages that get a lot of snow in the winter, residents collect wild greens in spring and autumn and dry them. The greens are stored in cloth bags that are dipped in a thick salt paste and hardened. When they need some greens, they soak them in water and use them to make “stegnopita” (dry pie).

Epirus also boasts a healthy livestock farming industry, a fact that is apparent in the pies as well. The all-time classic is the ordinary cheese pie with homemade phyllo pastry and feta cheese or its milder anthotyro cousin. The queen of all pies, one for special occasions and guests, is made with freshly made soft goat cheese. When mixed with soured milk, the fresh cheese is known as “pagouda” and the pie as “pagoudopita.” When the soured milk is not added, then the pie is known as “galatopsomo.”

The differentiation shows a certain sophistication of palate that surprises visitors to Epirus, who usually miss the nuances that a cheese pie can have.

“Thlasti” is a pie made of layers of buttered phyllo pastry and cheese that becomes puffy and crunchy as it bakes.

Cheese pies are also made without a phyllo top or bottom, with a baked mixture of boiled corn flour and milk, with crumbled feta and eggs added in.

Chicken pies are made using the boiled meat of the chicken and making a light bechamel with the stock, corn flour, eggs and sometimes cheese. Duck and other poultry replaces chicken in pies known as “breki” or “boureki.”

Meat pies are usually made with nice juicy chunks, though mince has made an appearance recently.

However, the most important distinction between Epirus’s pies is between those made for the family on a day-to-day basis – called “famelitiki pita” – and those made for special occasions, when additional attention is paid to the ingredients and execution.

Below is a very basic recipe that can be found all over Epirus in myriad variations using different pastry or none at all, different cheeses, with yogurt or eggs, or with the stuffing all together between a top and bottom layer of pastry. You can also add wild greens and herbs to this recipe.