Greece: the sequel (this time with even more tourists) 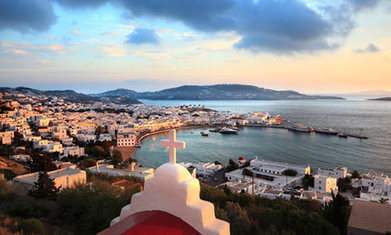 After three lean years marked by riots, strikes, social upheaval and political unrest, 17 million or so holidaymakers – 1.5 times the country’s population and an all-time record — are about to visit, according to officials.

The arrivals have never mattered more. Tourism accounts for almost 20% of GDP – and jobs. With recession-hit Greeks also struggling with a record level of unemployment, which has reached nearly 28%, the highest in the eurozone, industry earnings this year may well be the only income for many.

Up in the mini-resort that his father, Mykonos’s first hotelier, built back in the 1960s, Andreas Fiorentinos says Greeks have learned the hard way to appreciate the benefits of tourism.

"The crisis has taught us that we cannot fool our clients," says Fiorentinos, taking in a spectacular view framed by bobbing yachts below. "And it has made us more aware. People understand how important it is for our economy."

Like many, the third-generation hotelier believes the time has come for Greece to reinvent itself. For too long, he says, the industry has been overly dependent on its image as a destination of sun, sand and sea. "As a result of catering to price-sensitive tourists interested only in drinking and going to the beach, we have failed to tap into a whole market," he sighs. "It’s an outdated model that has to change."