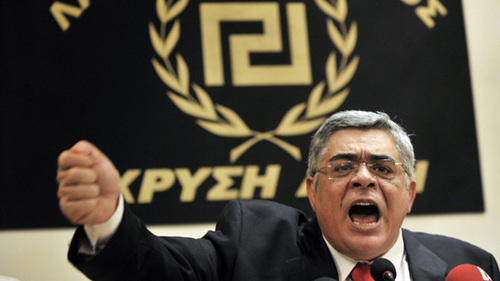 The leader of Greece’s Golden Dawn party, widely viewed as Europe’s most violent political force, appeared in court on Saturday night on charges of heading a criminal gang after police mounted an unprecedented crackdown on the neo-fascist party, arresting Nikos Michaloliakos and other key members of his organisation.

After a police operation in which anti-terrorism officers stormed the homes of Golden Dawn politicians across Athens, Michaloliakos and five of his MPs were seized. Fifteen other senior party activists, including a female police officer, were taken into custody accused of fomenting violence as members of a criminal organisation. Reading from a nine-page charge sheet, a public prosecutor accused the far-rightists of murder, extortion and money laundering.

The crackdown was hailed as "a historic day for Greece and Europe" by the public order minister, Nikos Dendias, who oversaw the operation, known only to three security officials before it was launched a little after dawn. "Golden Dawn tried to test the endurance of democracy," he said in a televised address, insisting that the inquiry into the party’s illegal activities would continue apace. "Today it got an answer from state justice."

Earlier in the day, following emergency talks with the prime minister, Antonis Samaras, the justice minister, Charlambos Athanasiou, promised "just justice" for those who had been arrested. "Justice has moved with decisiveness and transparency," Athanasiou told reporters gathered outside the prime minister’s city centre office. "I want to say for all those who have been arrested, if they are sent to trial there will be just justice."

By nightfall, authorities said 25 counter-terrorism units were still trying to track down the party’s deputy leader, Christos Pappas, who is accused in a strict hierarchy of command of jointly running a gang that, masked as a political organisation, had spawned terror on the streets of Greece. At least 11 others were also being sought, police officials said, citing "incontrovertible evidence" from intercepted telephone calls.

Michaloliakos was arrested in his Athens home at 7am. Greek media quoted the politician as telling police: "What you are doing is not right. The truth will shine," as he was taken into custody in handcuffs. Hundreds of Golden Dawn supporters gathered outside Athens’s police headquarters spurred on by a text message reportedly sent by the party to "support our moral and just struggle against the corrupt system".

Michaloliakos and his chief lieutenant, the party’s spokesman, Ilias Kasidiaris, were inside the building as the supporters massed. Only on Friday, Kasidiaris, who became infamous when he assaulted two female leftwing MPs on live TV last year, had openly joked that "we are here to hand ourselves in", as the party launched a lawsuit against Pasok, the junior leftwing party in Samaras’s fragile coalition. Police officials said a number of weapons had been discovered in the crackdown. Three unlicensed guns allegedly found in Michaloliakos’s home were to undergo ballistics tests, and tens of thousands of euros was also apparently found, the media reported.

Greece’s third biggest party, Golden Dawn, has seen its popularity soar on the back of desperation. The organisation is accused of making violence its calling card, and human rights groups hold it responsible for hundreds of attacks on dark-skinned immigrants in the three years since the debt-stricken country plunged into crisis.

Since being elected to parliament with 18 MPS and 7% of the vote for the first time in June last year, the party has been linked to a wave of violence directed mostly against migrants, gay people and leftists on Greece’s increasingly fractious political scene. The fatal stabbing this month of Pavlos Fyssas, a hip-hop star popular among anti-fascists, prompted widespread outrage and galvanised the governing coalition into taking action.

Amid revelations that Golden Dawn had set up hit squads with the help of commandos in the special forces and openly colluded with the police, the authorities launched a far-reaching inquiry into the group’s activities.

Two senior police officers resigned and several officers were suspended after allegations of links with the party. More than a dozen Golden Dawn members, including the 45-year-old man who confessed to murdering Fyssas, were rounded up. Not since the collapse of military rule have MPs been arrested en masse. "This is without precedent in Greek political life," said a lecturer in constitutional law, Kostas Chrysogonos. "Authorities are acting within the law, but I also think it would have been constitutionally more correct if they had asked parliament to lift their [MPs’] political immunity first."

Even if the politicians are imprisoned pending trial, they will still retain their standing as MPs, experts said.

As he was hauled under armed guard from police headquarters to the court, Kasidiaris shouted: "Long live Greece. Nothing will bend us, nothing will frighten us." Previously he had told a TV show that "they can arrest us, they can put us in prison, but we will still be MPs. We are not going to go back even one step."

Samaras’s shaky coalition has been applauded for its tough stance, with opinion polls showing a drop in support for Golden Dawn and a slight rise for his conservative New Democracy party, but there are fears the crackdown could ultimately damage the government.

The opposition leader, Alexis Tsipras, of the radical left Syriza party, said last week the party should be confronted "within the law, not outside it".

Before the crackdown Golden Dawn was polling at around 15%, prompting it to boast it had "more than a million" supporters in Greece. Michaloliakos warned last week that he might withdraw his 18 MPs from parliament, a move that threatened to unleash political instability in a country dependent on international rescue funds to survive.

The politician had also said that "mudslinging and slander" against his party would "open the gates of hell".