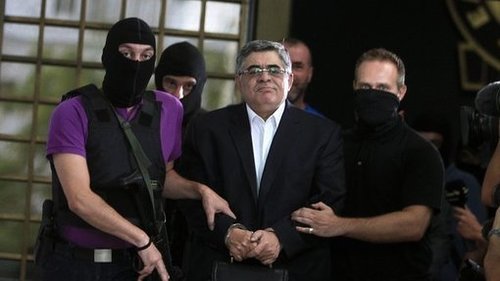 Nikos Michaloliakos, the Golden Dawn party’s leader, was escorted on Saturday by police officers outside the Athens police headquarters..

On Saturday, Nikos Michaloliakos, Golden Dawn’s leader and a member of Parliament, was charged with forming a criminal organization. With a defiant expression on his face, Mr. Michaloliakos raised his cuffed hands as he was escorted by police officers. Another arrested lawmaker, Ilias P. Kasidiaris, shouted as he was led away: “Nothing will bend us! Long live Greece!” Other arrests followed.

The police had not yet released details of the criminal charges, but they include murder, attempted murder and blackmail, according to a court official. The party has denied any role in the killing, and the police had not said what evidence they have linking the arrested party members to specific crimes.

Since 2012, when it gained seats in Parliament, Golden Dawn has engaged in a campaign of intimidation against immigrants. In April, the Council of Europe’s human rights commissioner described it as “a neo-Nazi and violent political party” and urged that it be banned under international human rights treaties, but the arrest of elected lawmakers is a rare step for any European democracy.

The move may curb Golden Dawn’s influence, at least for now, especially in Parliament, where the party holds 18 seats after elections last year during a volatile moment when Greece was on the precipice of exiting the euro zone.

Nonetheless, the disenchantment stoked by the economic crisis that helped propel Golden Dawn’s rise is unlikely to fade anytime soon.

“As the country is mired in its worst economic crisis in modern history, support for extremist and antiestablishment parties is likely to remain high in the coming years, regardless of the future of Golden Dawn as a political party,” the geopolitical intelligence, economic and political firm Stratfor said in an analysis.