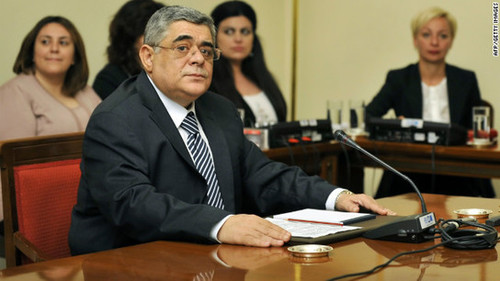 The leader of Greece’s extreme right wing Golden Dawn party and four party lawmakers were charged Saturday with forming and participating in a criminal gang.

Nikos Michaloliakos and the other four — all members of parliament — left the Athens prosecutor’s office in handcuffs, escorted by counterterrorism officers in bullet proof vests and balaclavas.

It is the first time since the restoration of democracy in 1974, following a seven-year junta, that a party leader and members of parliament have been arrested.

Michaloliakos’ arrests and those of the lawmakers — Elias Kassidiaris, Elias Panagiotaros, Ioannis Lagos and Nikos Mihos — are part of a crackdown following a controversial stabbing death.

At least 10 more people have been arrested, including Golden Dawn party members, police said. More than 30 warrants were issued as police operations were launched across Greece Saturday.

Pavlos Fyssas, a popular anti-fascist figure and well-known hip-hop artist with the stage name Killah P, was the victim of the knife attack that was allegedly committed by a Golden Dawn supporter.

Clashes broke out in a working-class Athens suburb this month, as Fyssas’ death inflamed already growing concerns about the rising influence of Golden Dawn. The ultranationalist, anti-immigration party has been linked by critics to street violence and neo-Nazism.

The violence came despite police raids of Golden Dawn offices and the arrest of a 45-year-old party supporter who police say admitted killing Pavlos Fyssas.

Kassidiaris denied his party’s involvement in Fyssas’ death, calling it a "heinous crime."

The Greek constitution does not allow for political parties to be banned, however, and the arrested lawmakers will retain their parliamentary seats unless they are convicted of a crime.

Deputy Prime Minister Evangelos Venizelos, whose socialist Pasok party is part of the governing coalition, said Golden Dawn "must be dealt with as a criminal organization."

In 2012, the party rode a wave of dissatisfaction among some Greeks over internationally imposed austerity measures amid the country’s deep financial crisis, winning 7% of the vote and gaining seats in parliament for the first time.

A poll carried out from September 19 to 21 by Rass, for the Eleftheros Typos newspaper, indicated that support for Golden Dawn had fallen to 5.8%, down from 8.3% on September 15.

Back in 2009, before the financial crisis and ensuing austerity measures hit Greeks hard, the party polled only 0.3%