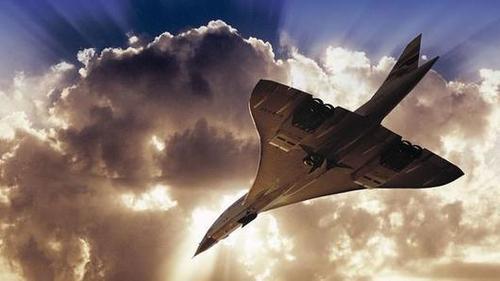 Concorde may have retired but a number of projects hope to bring supersonic air travel back to the masses.

On a gusty March day in 1969, the future of air travel was revealed.

A spontaneous burst of applause could just be heard over the deafening roar of the plane’s four giant engines as they sped the sleek aircraft into the sky. Twenty seven minutes later the screech of wheels and a whoosh of a parachute, signaled the end of the maiden voyage of Concorde, one of only two supersonic passenger planes to ever fly.

When the slender, beak-nosed aircraft entered service seven years later they whisked champagne-sipping passengers across the Atlantic in just three and a half hours. The twenty craft went on to fly routes for another 27 years to South America, Malaysia and beyond, proving a hi-tech vision of glamorous, fast-living. But it all came to an end in 2003, when the fleet was retired over concerns about high operation costs, limited demand for the expensive tickets and the jets’ safety, following a deadly crash three years earlier.

But supersonic, commercial air travel still holds an allure for passengers, pilots and engineers alike. And now, with the help of modern materials and advanced computer simulations, aerospace researchers hope they will be able to overcome some of the issues that Concorde faced, providing a blueprint for the next generation of supersonic planes.

Two of the main problems facing any supersonic aircraft are increased drag, meaning increased fuel consumption, and that famous “sonic boom”, a loud gunshot-like noise that disturbed anyone unfortunate to be under the flight path.

The blast, which occurs when the plane breaks the sound barrier, is why Concorde was limited to routes over the ocean. You could travel from London or Paris to New York at high speeds, but there was no onward connection to Los Angeles. And several other countries were forced to ban the plane from its airports or even airspace, for the disturbance it caused.

“Although the aircraft is moving faster than the speed of sound, it generates pressure waves that only move AT the speed of sound” explains Professor Karthik Duraisamy, from Stanford University, an expert in modeling this type fluid flow.

“The pressure waves start bunching up together, and create a so-called shockwave. If you’re standing on the ground and the plane flies above you, the wave passes over you. That’s the sonic boom.”

Big names in the aviation industry are trying to find solutions, including Boeing, Lockheed Martin, and Nasa. The space agency recently conducted wind tunnel tests of designs from both manufacturers that showed the showed the boom could be reduced to levels that are generally thought to be acceptable for routine overland flights. But an engineer at MIT, believes that a radical idea from the 1950s may hold the key to ‘boomless’, fuel-efficient craft.

Professor Qiqi Wang is part of a team that has shown that a bi-plane – essentially  two, stacked wings – could bring huge improvements over the traditional delta-wing seen on Concorde. The idea was first proposed by German engineer Adolf Busemann, an influential aerospace designer who among other things first proposed the use of ceramic tiles to protect the Space Shuttle on reentry. According to theory, the Busemann bi-plane, when travelling at supersonic speeds, should  produce less drag meaning it should use less fuel. Plus, the triangular wings can be “tuned” so that sonic boom is almost entirely eliminated.

“When we have two wings, if we place them in a carefully designed manner, the shockwaves from the two wings can cancel each other” says Prof. Wang.

However, the design has a major limitation for a plane – it lacks lift. The two wings  create a narrow channel that limits the amount of air that can flow between them. When the plane accelerates through the sound barrier it becomes “choked” with air, causing an incredible amount of drag – much larger than a traditional Concorde-like design. This effectively means that a supersonic bi-plane works beautifully on paper, it could never reach supersonic speeds in the first place.  Not only that, but the sonic-boom cancellation only works at a specific speed. If you are not at that exact speed, you don’t get the desired effect.

To address these problems Wang turned to computer modeling to come up with an optimum wing shape for different speeds. The researchers then crunched through the 700 different shapes to produce an optimal configuration that would work at all speeds. Amongst the design tweaks they came up with were a smoothed inner surface for each wing to help air flow. The overall result is a wing that could fly at supersonic speeds, with half the drag of Concorde; something that could significantly cut fuel use.

Whilst it sounds like Wang and his team have cracked the problem, there is still a long way to go. So far, Wang has only shown the bi-wing concept working in two dimensions. Scaling this up to a three-dimensional prototype is more of a challenge. And expanding wing design to plane design, and getting everything to work together will be harder still.

“We are experts in designing components, and we are experts in designing something for a specific condition” says Duraisamy, who was not involved in the MIT work. In a supersonic aircraft though, nothing is constant. The conditions at take-off and landing are very different to the conditions at cruising speed. The plane encounters a whole range of possibilities, from different temperatures to different air densities.

“When you think about a supersonic aircraft it has to take-off at zero velocity, and has to reach a supersonic velocity and keep flying there,” says Duraisamy. “It also operates at zero altitude to extremely high altitude.”

But a Japanese group at Tohoku University may hold the key. The group has also been working on a Busemann bi-plane called Misora (Mitigated Sonic Boom Research Airplane and the Japanese for “beautiful sky”). However, unlike the MIT project that aims to design one wing for all uses, the Japanese project has proposed movable control surfaces so that the wings could change shape at different speeds. And if that sounds far-fetched, consider Concorde’s “drooping nose” that could be raised and lowered at different stages of flight. Of course to shape and sculpt a wing will take much more sophisticated technology and materials, but these shape-shifters could hold the key to next-generation supersonic air travel.

However if you are holding off booking that dream transatlantic trip in the hope of the shorter flight time in the near future, you may have a long wait. Duraisamy believes  it will be “15 to 20 years” before anything like Concorde is seen in the skies again. And even then, it probably won’t get around all of the problems Concorde encountered.

“Maybe a supersonic business jet will come first,” he says, “because people are willing to pay the money.”